In 657, the first Abbey of Whitby (then called Streaneshalch) was founded by Hilda (614-680), a great-niece of King Edwin of Northumbria, who as a young girl had been baptised with him at York.  Two hundred years later it was destroyed by the Vikings and nothing remains of the original foundation.  In the thirteenth century, a new abbey was built whose ruins can be seen, set dramatically on the clifftop above the town (YO22 4JT). The ghostly shell of the building with its spiky pinnacles, empty windows and crumbling gables suggested a good location for the novelist Bram Stoker to set the arrival of Count Dracula in England! 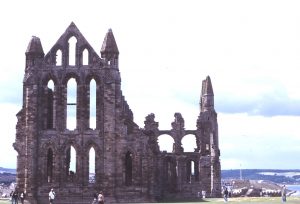 Adjoining the abbey site is the seventeenth-century Cholmley House, now a visitor centre.  A few items excavated from the original foundation are on display here.  These include decorated Bible mounts, parts of hanging bowls, styluses, spindle whorls, coloured glass and bone combs.

Hilda's monastery was unusual in being a "double house" for both men and women.  One of her lay brothers, who reputedly looked after the pigs, was Caedmon (fl 670), celebrated as the first English poet.  He is said by Bede to have been able, after a short meditation, to render into English verse any passage of scripture translated to him.  The only work to have survived is a few lines from his Hymn of Creation.  Caedmon is commemorated by a large cross unveiled in 1898 outside St Mary's Church, close to the abbey ruins.

Whitby is famous as the setting of the Synod of Whitby in 664, where King Oswy had to arbitrate between the Roman and Celtic rites of the church, both of which had been celebrated in Northumbria for some time.  The Celtic tradition derived from monks like Aidan coming from Iona in Scotland, while the Roman influence began with the missions of Augustine and Paulinus.  The Roman party was led by Wilfrid, Abbot of Ripon, while the main proponent of the Celtic ways was Colman, Bishop of Lindisfarne.  Ostensibly the discussion was about superficial details like the date of Easter and the shape of a monk's tonsure, but more fundamental matters were at stake.  The arguments went back and forth with Colman supported by Hilda, Cedd (bishop of the East Saxons) and initially by Oswy himself.  Those on the Roman side included Oswy's wife and son and James the Deacon, who had bravely carried on after the flight of Paulinus thirty years before.  When Oswy eventually decided in favour of the Roman ways, he little realised that he had determined he course of Christianity in England for the next 900 years.  The English church came increasingly under the sway of Rome, a situation only broken at Reformation.

Sited on a large headland jutting out into the North Sea, the dramatic setting of Scarborough Castle (YO11 1HY) rivals that of Bamburgh in Northumberland.  The castle is yet one more place where George Fox (1624-1691) was imprisoned during his turbulent career.  Other castles up and down the country - from Lancaster to Launceston - also played host to the founder of the Quakers.  Fox's longest period of incarceration, from April 1665 to September 1666, was spent in the Cockhyll Tower at the southern end of the castle walls.  He complained that he had no fire, hearth or chimney in his cell and that the rain came in and soaked his bed.

Ripon has one of the largest market squares in the north of England and close by is Ripon Cathedral (HG4 1QT), with two hefty towers at the west end and another in the centre.  The first cathedral on the site was built by the energetic Wilfrid of York around 672, but most of the present building dates from the thirteenth century.  Lying under the central tower, Wilfrid's Saxon crypt has survived for 1300 years and is open to visitors.  It shares many features with his other surviving crypt at Hexham Abbey.  Excavations in 1997 showed that the roof of the crypt's main chamber was supported by stone ribs originally erected over a temporary wooden framework, a feature unique in England.  Wilfrid travelled widely and the idea for this construction may have come from continental styles.

The cathedral treasury contains the beautiful Ripon Jewel found close to the cathedral in 1976.  It is a small gold roundel inlaid with gemstones and may have been part of a cross or casket commissioned by Wilfrid. 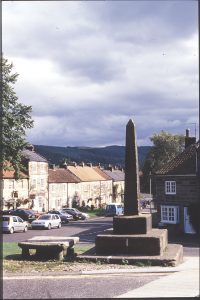 John Wesley made several visits to the village, preaching in the parish church, at the home of Watson Adams, a former Franciscan priest, and from an old stone barter table which still stands by the market cross (DL6 3AA).  The success of his labours can be judged by the presence of one of the oldest Methodist chapels in the country.  Dated 1754, it lies through a stone arch and down a cobbled alley, just across the road from the table.

The cottage next to the alley was the home of Elizabeth Tyerman, a Quaker housewife and one of his converts.  Wesley, Adams and Mrs Tyerman formed an improbable trio who began a work of God in the village.  Luke Tyerman was converted here and later wrote authoritative biographies of Wesley and several other Methodist pioneers.