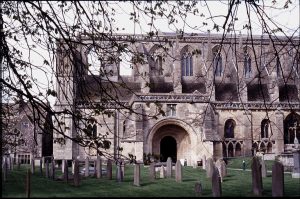 The Saxon saint and scholar Aldhelm (640-709), a kinsman of King Ine of Wessex, was one of the greatest Englishmen in the centuries before Alfred.  Poet, musician, church builder and bishop, he travelled constantly throughout his diocese preaching to the people in their own language.  Aldhelm was educated at Malmesbury in a small community founded by an Irish monk and completed his studies at Canterbury under the African scholar, Hadrian.  He later became Abbot of Malmesbury and built the first monastery here in 676, whilst also founding monastic communities at Frome in Somerset and Bradford-on-Avon.  With the formation of the diocese of Sherborne, he became the first bishop and built its first cathedral.  He died on one of his preaching journeys at Doulting, Somerset, and was buried at Malmesbury.

The present Abbey (SN16 9BA) dates from the twelfth century and has a magnificent Norman doorway.  There is no trace of the original Saxon foundation.  Now only a third of its original size, the Abbey still dominates the town and was once part of a monastic complex covering forty-five acres.  At the Dissolution, it survived as Malmesbury's parish church.  The twelfth century scholar and historian,  William of Malmesbury, spent all his life as a monk here.  His History of the Kings and History of the Bishops are primary sources for the medieval period.  He wrote biographies of Aldhelm, Dunstan and Wulfstan, and also reported that in about 1010 a monk called Eilmer built himself wings and jumped from the tower of the abbey - possibly the earliest reference to human flight!

Aldhelm and William are depicted side by side in modern stained glass windows in the vestry, and the Abbey also has the tomb of King Athelstan, grandson of Alfred the Great and reckoned as the first King of all England when he united the kingdoms of Wessex and Mercia.  The Catholic church in the Market Place commemorates Aldhelm with a small sculpture on the outside wall. 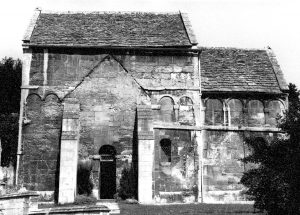 Bradford was not designed for cars, nor indeed for pedestrians!  Narrow streets rising steeply on each bank of the river squeeze between ancient buildings, of which the town has many.  More ancient than most is the little Saxon Church of St Laurence (BA15 1 LW).

In 1856, Canon William Rich-Jones, vicar of Holy Trinity in Church Street, noticed that a building opposite his church, which had been variously used as a cottage, a warehouse and even a school, was in fact a Saxon chapel nearly a thousand years old.  Surrounding buildings and a heavy covering of ivy had disguised its original features.  Now restored, it is a fine example of Saxon architecture.  Unlike most churches of the period, it is unusual in never having suffered later alterations.  Inside we can see the two carved angels over the chancel arch which first alerted the vicar to its origins.

It is known from the writings of William of Malmesbury that Aldhelm had founded a church in Bradford in the seventh century.  Initially, it was thought that this was Aldhelm's original building.  While some parts may date from that time, most of it is now thought to be from around the year 1000.

The downs above Edington on the northern edge of Salisbury Plain are the traditional site of the Battle of Ethandun, scene of  Alfred the Great's victory over the Danes which secured the Peace of Wedmore.  The familiar crossed swords symbol appears on maps with the date 878.  Hard evidence is lacking, but it has been suggested that the White Horse on the Downs here was cut to celebrate the victory.  The church at Edington is magnificent, but makes no mention of Alfred's victory.  We must leave such questions to historians and archaeologists. 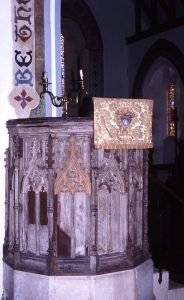 The village is tucked away among narrow roads between Chippenham and Bristol. It is close to Castle Combe, regularly voted the prettiest village in England, and in the opinion of many, West Kington, built of mellow Cotswold stone, runs it a close second.  The same stream runs through both villages and the view of St Mary's Church tower through the trees is one of the finest in the west of England (SN14 7JE).  The church is reached on foot up a narrow path or by car through an adjacent farmyard. It was here that Hugh Latimer (1485-1555) came as vicar from 1530 to 1535.  The pulpit he used can still be seen and he is also said to have preached from beneath the ancient yew tree in the churchyard.

Latimer was made Chaplain to Henry VIII in 1534 and Bishop of Worcester in 1535.  He was an outspoken preacher, not afraid to criticize the king, and gradually came to adopt the doctrines of the Reformation.  In 1539 he resigned his bishopric rather than sign the Act of the Six Articles.  On the accession of Queen Mary in 1553, he was arrested and tried.  Convicted for heresy, he was burned at the stake alongside Nicholas Ridley in Oxford, where we tell the story in full. 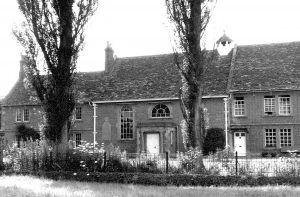 Remote in rural countryside between Chippenham and Calne, the village consists mainly of a few houses arranged around a small green.  On one side, behind four tall poplar trees, is an interesting group of buildings with an unusual history.  It is one of the few centres of the Moravian church in England (SN15 4LU).

The Moravians began as Christian community living on the estates of Count Nikolaus von Zinzendorf in Saxony in the eighteenth century.  They were pioneers of missionary work, and it was an encounter with Moravians on a journey to America that led to the conversion of John Wesley.  The connection with East Tytherton can be traced back to one of Wesley's friends, John Cennick (1718-1755).  Cennick was brought up in the Church of England, but attached himself to the early Methodists and for a time was headmaster of the school in Kingswood founded by Wesley for the children of colliers.  In 1745 he visited the Moravian community in Germany and was later ordained a deacon of the church.  For the last few years of his life he served the church and school here.  Today, Cennick is remembered as author of the hymn Children of the Heavenly King and co-author (with Charles Wesley) of the triumphant Lo, He comes with Clouds Descending.

The central part of the church complex is a typical eighteenth century non-conformist chapel, with cupola, bell and moss-covered quarry tiles.  Extensions on either side serve as cottages for the church community.  The chapel is still used for worship and the dates from 1792, some years after Cennick's death.  Inside, the preacher's chair is made of pearwood taken from a tree under which Cennick preached.

The village lies on the edge of Salisbury, and here in 1630 came George Herbert (1593-1633) to devote his final years to prayer and poetry.  Herbert was related to the Earls of Pembroke, whose magnificent home, Wilton House, lies a few miles to the west.  A brilliant scholar, he graduated from Trinity College, Cambridge, and in 1619 became Orator for the university.  A life at court beckoned, but Herbert chose Holy Orders and relative obscurity.  His legacy is some noble hymns, including Let all the world in every corner sing, My God and King. 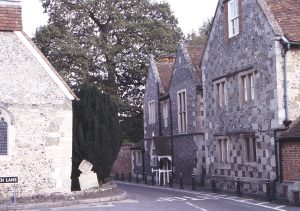 Despite its small size, Bemerton has three Anglican churches.  Herbert's church is the tiny thirteenth century St Andrew's on the corner of Lower Road and Church Lane (SP2 9NR), where the traffic unfortunately disturbs an otherwise peaceful spot.  A framed display inside tells the story of his life and a stained glass window at the west end shows Herbert with a violin - he loved music - together with his friend and contemporary Nicholas Ferrar, who founded the community at Little Gidding.

After only three years here, Herbert died of consumption and is buried beneath the altar of the church.  His rectory, much larger than the church itself, faces the church across the narrow street and has a quaint inscription on the wall. The rectory garden slopes down to the river Avon and reputedly has a medlar tree planted by Herbert.

North and South Tidworth are garrison towns on the edge of Salisbury Plain, entirely taken up with barracks, parade grounds and training facilities for the army.   A splendid mansion on the southern outskirts of the town, confusingly called Tedworth House, is also owned by the army and not accessible to the public (SP9 7ST).  It can be seen through the trees from the main A338, but any closer inspection might arouse the suspicion of security guards! 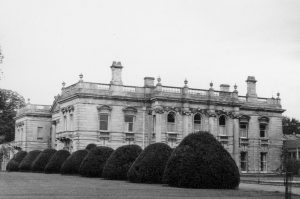 In the late nineteenth century, this was the home a wealthy retired tea planter called Edward Studd, one of whose sons was the famous missionary C. T. Studd (1862-1931).  Studd senior was converted at a meeting of the American evangelist D. L. Moody in 1877, and then zealously sought to introduce his family, friends and servants to the gospel of salvation.  C. T. was a brilliant cricketer who captained Eton and Cambridge, and toured Australia with the national team, which included W. G. Grace.  In 1885, along with six other young men from well-to-do families, he renounced fame and fortune to join the China Inland Mission as one of the Cambridge Seven.  A glance at Tedworth House, Studd's boyhood home, gives some impression of what he gave up.

After some years in China, Studd went to India and later to Africa, where he founded the Heart of Africa Mission.  He was contemptuous of half-hearted Christianity and summed up his philosophy in the couplet: