Cornwall has a tradition of Celtic Christianity reflected in the villages and churches named after obscure saints not remembered elsewhere in England.  As Saxon and Viking invaders pushed the Celts into their western strongholds, their lives and deeds were often forgotten in the mists of time.

There are many links with the ministry of John Wesley (1703-1791) and his fellow preachers who brought the evangelical revival to Cornwall.  Invited by a Bristol sea captain in 1743, Wesley had a rough reception at first and his brother Charles was severely assaulted at St Ives.  In due course the miners and fishermen warmed to his message and Cornwall became his most fruitful field of labour, and the county most affected by his influence.  Despite recent decline, today almost every town and village still has a Methodist church and some have more than one. 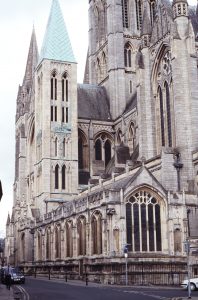 The three spires of the Truro Cathedral (TR1 2AF) rise majestically above this small Cornish town and at first glance it would seem like another of England's medieval masterpieces.  Closer inspection, however, shows the stonework to be fresh and unweathered.  Most of the Cathedral was actually built between 1880 and 1914, but it incorporates the south aisle of the former St Mary's Church which is much older.  As one writer described - A fragment of the old church nestles under the wing of the rest like a chicken.   Truro was raised to the status of a diocese in 1877, with Dr Edward White Benson, later Archbishop of Canterbury, as the first bishop.  However, the main architect of Truro's spiritual heritage was Samuel Walker (1714-1761), who never aspired to be anything more than curate of the former St Mary's.

Walker was born and educated in Exeter and in 1740 became curate and then vicar of Lanlivery, a village near St Austell.  In 1746, he came to Truro, the main attraction being the Assembly Rooms, where he could enjoy card playing and dancing.  Within a few months, however, he came under the influence of George Conon, master of the grammar school, and in 1747 experienced a profound conversion.  He became a friend and correspondent of John Wesley, who by now was making regular visits to Cornwall.  Some of Walker's parishioners were unimpressed by his new "Methodist" tendencies and called upon the absentee rector to dismiss him.  The rector went twice with the intention of doing so, but was so disarmed by Walker's grace and courtesy that he was unable to broach the subject.  Over the next fourteen years, St Mary's became the centre of evangelical awakening in Cornwall and it was said of Truro that, with most citizens attending Sunday services, You might fire a cannon down any street in church time without any hope of killing a human being.  One of the most faithful members of Walker's congregation was John Martyn, bookkeeper to a Truro merchant, whose son Henry Martyn (1781-1812) became a pioneer missionary to India and Persia. 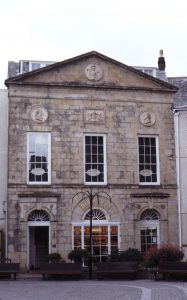 In the Cathedral, the north and south aisles have lancet windows which give a pictorial history of the church from earliest times.  They show saints, apostles, evangelists and martyrs from virtually every period and region.  The windows nearest the west door on both sides have the most direct relevance to Cornwall.  On the north side we see Martyn grouped with John Keble and Frederick Maurice, while in the lower panel he is debating his Farsi translation of the New Testament with turbanned Persian scholars.  On the south side, the first window shows John Wesley together with his brother Charles and Samuel Walker, while the lower part has Wesley preaching to miners at Gwennap Pit, a favourite preaching spot near Redruth.

The gem of the cathedral is the baptistry, adjoining the south aisle, which is a memorial to Henry Martyn. It has windows with Cornish saints in the upper halves and scenes from the life of Martyn below.  These include his education at Truro Grammar School, setting out for India, preaching at Cawnpore and his death from consumption at Tokat in Turkey, while returning to England.  Close to the baptistry is the entrance to the surviving south aisle of St Mary's church, which forms a separate chapel.  The ceiling is decorated with the coats of arms of local families and institutions. 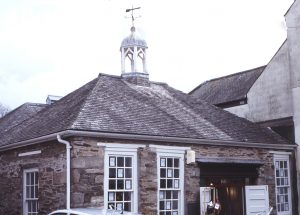 Facing the open space outside the west door of the cathedral, we can see the Georgian facade of the former Assembly Rooms, which originally drew Samuel Walker to the city.  Medallion portraits and other classical features decorate the frontage.

In St Mary's Street, close to the Cathedral, the little building with a cupola and weather vane, now a shop, calls itself the Old Grammar School Hall and was formerly Truro Grammar School.  Here many distinguished Cornishmen received their education, including Henry Martyn and Thomas Biddulph (1763-1838).  Biddulph was a pupil of George Conon and became the long-serving vicar of St James church in Bristol, and a co-founder of the Church Missionary Society. 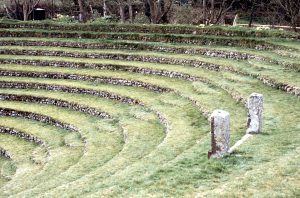 The village of Gwennap lies just off the road from Falmouth to Redruth, but Gwennap Pit (TR16 5HH) is nearer to Carharrack up a lane called Wheal Damsel Road.  It was formerly a large depression caused by old mine workings, which John Wesley used as a convenient preaching arena.  After Wesley's death it fell into disuse, but in 1806 it was landscaped to form a grassy terraced amphitheatre, considerably smaller than in Wesley's time.  Two stone pillars on one side are known as Wesley's Pulpit.  He preached here to large crowds eighteen times between 1762 and 1789, and a commemorative open-air service has been held annually since 1807.  The chapel in front, known as Busveal Chapel, was built in 1836 and a Visitor Centre has been added more recently.  Pictures, mosaics and quotations by Wesley in ceramic are displayed outside.

Carharrack Methodist Church in Chapel Terrace has a Museum of Cornish Methodism, with displays of the early life of Wesley and the history of Methodism in the county following his first visit in 1743.  There are plans to move the contents to a purpose-built museum at Gwennap Pit.

A triangle of villages in the lanes between Truro and Redruth preserve memories of one of Cornwall's most colourful characters, the tin miner and Methodist preacher Billy Bray (1794-1868).  He was born and died at the village of Twelveheads, the unusual name referring to the shafts of former tin mines, whose chimneys and engine houses still punctuate the skyline. 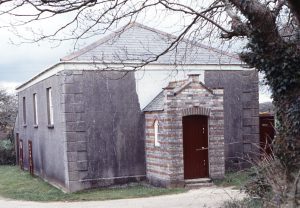 Bray led a dissolute life in his youth, but after his conversion styled himself the "King's Son", and was renowned for his ready wit and effervescent joy.  He is remembered for his most famous quotation If they were to put me in a barrel, I would shout Glory out through the bunghole!  As a preacher, Bray saw much fruit from his work and built chapels to accommodate his converts.  The only one remaining, which Bray built with the help of his small son, is known as Three Eyes Chapel at Kerley Downs (TR4 8LB) on the road between Chacewater and Baldhu.  The chapel is preserved in memory of Bray, its evocative atmosphere recalling the early days of Methodism. 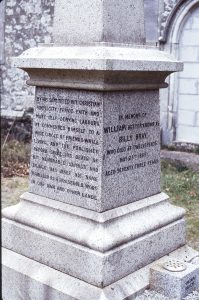 Banked rows of wooden pews face the pulpit, above which used to be three windows, giving the chapel its name.  The pulpit and steps have ornate banisters and Bray's portrait hangs on the wall above.  The chair in front is carved with the words Billy Bray 1839.

Bray is buried at Baldhu, where the former church has been converted for residential use (TR3 6EG).  The churchyard has been landscaped, but Bray's tomb with its tall obelisk is easily recognised.  The lengthy epitaph refers to Bray's sanctified wit, Christian simplicity, fervid faith and many self-denying labours. 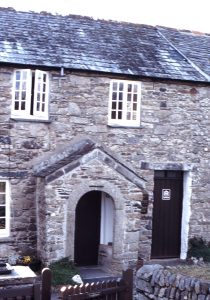 This is the last village on the road from Launceston before the bleak and windswept Bodmin Moor.  In the eighteenth century, this was a formidable journey and many a weary traveller would have had to battle through rainstorms or snowdrifts before reaching the refuge of an inn at Bodmin.   In 1743, two of John Wesley's preachers, John Nelson (1707-1774) and John Downes, sought shelter at the cottage of a local stonemason, Digory Isbell (1718-1795) and his wife Elizabeth.  Following the visit, Isbell, inspired by the biblical example of the Shunammite woman who built a chamber for the prophet Elisha, added two rooms to the back of his house for the use of travelling preachers.  In Wesley's time, the main road, such as it was, ran past the cottage door, but it has now been bypassed by a road behind the cottage and also by the busy A30 dual-carriageway a few yards away.

Now preserved as a Methodist place of worship, Isbell's Cottage (PL15 9TG) can be visited, as in Wesley's day, via a side door without disturbing the occupants.  It consists of just two small rooms, one above the other, but the open fireplace downstairs and the prospect of a warm bed must have been a welcome sight to exhausted travellers.   On 2nd April 1744, John Wesley wrote in his diary, About two we came to Trewint, wet and weary enough, having been battered by rain and hail for some hours.... In the morning Digory Isbell undertook to pilot us over the great moor, all the paths being covered with snow, which in many places was driven together, too deep for horse or man to pass. 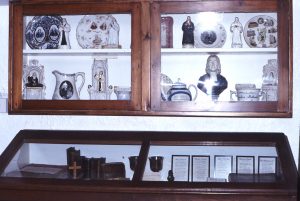 The side passage has a display telling the history of the cottage and the rooms contain a typical collection of Methodist memorabilia - furniture, books and letters, commemorative china and scenes from Wesley's life.  Opposite the cottage, a little paved garden has been laid out for the benefit of visitors. 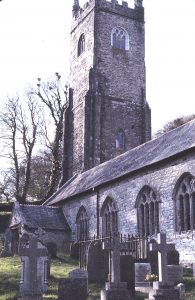 Following Wesley's visits to Trewint, the area became the centre of a flourishing Methodist society and at Altarnun, half a mile away, there are two chapels.  The oldest, now a private house, has steps on the outside to a door halfway up the side and a profile half-relief of Wesley.

Digory Isbell, builder of the "prophet's chamber", is buried in the churchyard of St Nonna (PL15 7SJ), his tomb enclosed by an iron railing.  It records that Isbell and his wife were the first to entertain Methodist preachers in this county.  The church itself is impressive and known locally as the Cathedral of the Moor.  It has rough granite pillars, carved from single pieces of stone, intriguing sixteenth century bench-ends and a Norman font.

The town is dominated by the ruined Castle (PL15 7DR) built by Richard Earl of Cornwall, brother of Henry III, in the thirteenth century.  Adjoining the North Gate is a dungeon known as Doomsdale, which we can view through the bars of a gate in the archway.  This has held a number of distinguished prisoners including Cuthbert Mayne, a Catholic priest burned at the stake in 1577, and George Fox (1624-1691), founder of the Quakers.  Fox was held here for eight months in 1656, the time extended by his refusal to remove his hat in court.  A plaque was put up in 1924 to mark the tercentenary of Fox's birth.

Today the dungeon is open to the skies and overgrown with vegetation, but artists' impressions in the gateway and the exhibition area show Fox in an overcrowded cell with fellow Quakers in what must have been appalling conditions.