It is mainly memories of England's greatest king, Alfred the Great (849-901), that bring us to Dorset.  In Saxon times, the county formed part of the kingdom of Wessex, for which Alfred fought many battles against the Viking invaders.  When peace was secured, he sought to establish institutions of law and education.  His most important monastic foundation was at Shaftesbury and he himself may have been educated at Sherborne.  Three of Alfred's brothers, who all preceded him as king, were buried in the county. 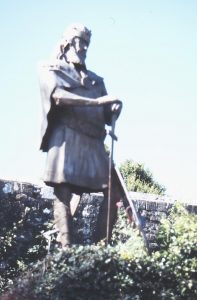 Today only stones remain of the ancient Abbey (SP7 8JR), but the beauty of the town makes it worth a visit nonetheless.  In 880, Alfred ordered the rebuilding of the town and founded the monastery, installing his daughter Aethelgiva as the first abbess.  The site, on the spur of a hill, was probably chosen for being easily defensible.  Today, the cobbled Gold Hill, running down steeply from near the ruins, provides one of the most beautiful and evocative images of rural England, worthy of any chocolate box or jigsaw puzzle.  Aethelgiva was buried her in 947, as were other members of the Saxon nobility including King Edward the Martyr in 979.  Between 1080 and 1120, the abbey was enlarged by the Normans, but following the Dissolution by Henry VIII, the great church was demolished and its treasures and lands seized.  The ruins were gradually plundered and some of the stones can be seen in later buildings in the town.

There is a modern museum displaying artefacts recovered from the site, including the presumed lead coffin of Edward, the boy king murdered by his step-mother at the age of sixteen.  The grounds show the layout of the abbey buildings and herbs common in Saxon times have been planted.  There is a wooden statue of Alfred and an altar to Edward, King and Martyr

The Abbey (DT9 3LQ) was founded early in the eighth century by the saintly Aldhelm (640-709), a kinsman of King Ine of Wessex, but no trace remains of the original foundation.  There is a tradition that Alfred the Great was educated at the monastic school but this is not mentioned by his biographer.  Alfred, however, visited the abbey on Good Friday 865 and two of his brothers were buried here - Ethelbald in 860 and Ethelbert in 865.

The present abbey, with its magnificent fan vaulting and carved bosses, was built largely between the 12th and 15th centuries, but there is a Saxon doorway at the west end of the north aisle dating from about 1000.  A brass plate in St Katherine's chapel records that Near this spot were interred the mortal remains of Ethelbald and Ethelbert his brother, each of whom succeeded to the throne of Ethelwulf their father, king of the West Saxons, and were succeeded in the kingdom by their youngest brother Alfred the Great.   At the Dissolution, the abbey escaped the fate of Shaftesbury, and survived as the parish church of St Mary, with some of the monastic buildings being incorporated into the present Sherborne School. 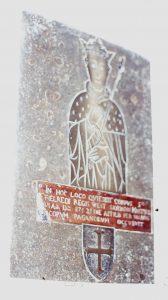 The Minster of St Cuthburga (BH21 1EB), on the site of a Saxon nunnery, has two towers and many other features to interest the visitor.  Built partly from light-coloured limestone and partly from reddish conglomerate, the outside has an unusual piebald appearance.

What brings us here is a brass now displayed on the wall of the sanctuary. It was formerly set into a purbeck marble slab, said to be part of the stone which covered the grave of King Ethelred, who died in a skirmish with the Danes not far from here.  His death in 871 brought his brother Alfred to the throne of Wessex at the age of twenty-one.

This is the only memorial brass to an English king.  It was engraved in the 15th century and the inscription added 250 years later.  In this place rests the body of St Ethelred, King of the West Saxons, Martyr, who in the year of our Lord 873, on the 23rd day of April, fell by the hand of the pagan Danes.  The date appears to be two years out and, contrary to one well-known guidebook, this Ethelred was not "The Unready". 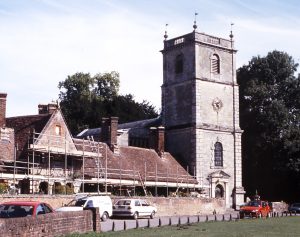 The scene is one of total peace, and quintessentially English.  The church of St Giles has almshouses on one side, the Shaftesbury estates on the other and faces an unspoilt village green (BH21 5LZ).  A glance at the memorials inside leaves us in no doubt of the name and title of the leading local family.  The Shaftesburys have been lords of the manor since the fifteenth century and many of the Earls have exactly the same name - Anthony Ashley Cooper.

The one we are looking for is the 7th Earl of Shaftesbury who is buried in the family vault and is remembered by a simple marble tablet on the south wall, just inside the wooden choir screen.  It gives his dates - born April 28th 1801, died Oct 1st 1885 - and quotes three of his favourite texts, including Surely I come quickly, Amen.  Even so come, Lord Jesus.  On the north side, a stained glass window showing Saints Sebastian, Christopher and Stephen remembers the great philanthropist and his wife Emily.

As a Tory aristocrat, Shaftesbury was an improbable candidate for his unofficial title The Poor Man's Earl.  His ancestors showed the usual disdain for their social inferiors, but Shaftesbury was influenced by the Christian example of his childhood nurse.  He spent his long career battling official apathy and interested opposition to bring in laws to limit the hours of child workers and improve factory conditions.  In the tradition of Wilberforce and the Clapham Sect, his lifelong efforts were applied to all manner of evangelistic and welfare projects, including Ragged Schools, city missions and the relief of urban poverty.