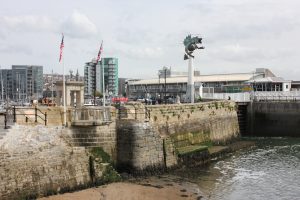 Heavily bombed in World War II, the harbour area of Plymouth has been rebuilt with modern flats, offices, marinas and an impressive aquarium.  On the west side of Sutton Harbour is the Barbican (PL1 2LR), a short walk down from the Hoe, where Sir Francis Drake famously decided to finish his game of bowls.  Here a network of streets from Tudor times has been preserved, and we can visit the Elizabethan House and Garden in New Street. 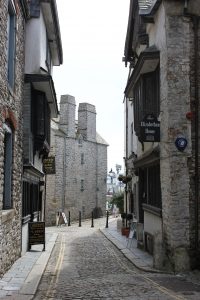 For a few days in the late summer of 1620, these cobbled alleys would have echoed to the footsteps and conversations of a group of men who, together with their wives, children and a few servants, were shortly to set out on a voyage which would change the course of history.  They were the Pilgrim Fathers, devout and hard-working folk mostly from the Midlands and East Anglia.  Their names are listed in the Elizabethan Garden, together with their trades and towns of origin.  There is another list on the side of Island House beside the harbour.  They only put in to Plymouth because one of their vessels, the Speedwell, was found to be unseaworthy despite recent repairs at Dartmouth, but  their landfall in America became Plymouth Rock and the colony New Plymouth.  They decided to abandon the Speedwell in Plymouth and all crowded aboard the remaining ship, the Mayflower.

On the West Pier is the plain inscription Mayflower 1620, marking the point from which the sturdy Pilgrims left England's shores for the last time on 6th September.  Nearby a bronze plaque tells the full story and a stone canopy covers the way to the Mayflower Steps on the harbour wall.  Other inscriptions here tell the story of earlier attempts to colonise the New World, including Sir Walter Raleigh's ill-fated Roanoake settlement, and Sir George Somers expedition to Jamestown in 1609.  This small jetty was the starting point for these and many other ventures to the New World and beyond.

The nearby Mayflower Museum tells the story of the Pilgrims and of other seafaring adventures which began here. 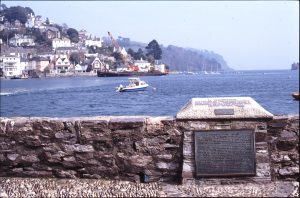 At Bayards Cove on the west bank of the River Dart, the Pilgrim Fathers put in for urgent repairs to the Speedwell.  They were here from August 23rd to 31st 1620 and a memorial near the lower ferry terminal tells the story of their adventure (TQ6 9AX).  After leaving Dartmouth, the Speedwell was still found to be unseaworthy and they put into Plymouth.  Here they decided to abandon the leaky vessel and continue their historic voyage in the Mayflower alone.

On the edge of the harbour is a statue of William of Orange, who arrived here from Holland on 5th November 1688, displaced his father-in-law, the Catholic James II, and preserved the Protestant succession. 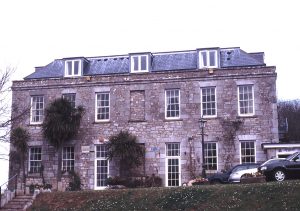 In the late eighteenth century, Brixham pioneered new deep-sea trawling methods and the parish of All Saints was founded to serve the rapidly growing fishing community of Lower Brixham.  The first vicar was Henry Francis Lyte (1793-1847), who came with his wife and family in 1824.  They lived first at a house called Whitegates in Burton Street, but in 1833 moved to Berry Head House, now a hotel set high on a cliff on the seaward extremity of the town (TQ5 9AJ). The hotel carries a blue plaque recording that Lyte wrote Abide with Me here on September 4th 1847. 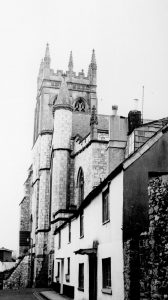 Lyte's ministry was popular with the fishermen and between 1825 and 1827 All Saints Church was enlarged to hold up to 1,800.  There was also a Sunday School for nearly a thousand children.  It was largely rebuilt in the late nineteenth century as the Henry Francis Lyte Memorial Church, standing in Church Street, close to the central car park in Middle Street (TQ5 8HG).  The pulpit used by Lyte has carvings of seaweed to reflect the fishing community he served.  The memorial on the east wall was donated by his family in 1860.

Many of Lyte's hymns are paraphrases of the Psalms, including Praise my soul the King of Heaven.  He suffered from asthma and chest problems for much of his life and eventually consumption set in.  A few weeks before he died he wrote his best known work Abide with Me in the garden of Berry Head House after watching the sun go down over Torbay.  Swift to its close ebbs out life's little day, they sing at each Cup Final, probably unaware of the dying hand that penned these lines.

No Englishman's work has had a greater influence on the world wrote Sir Arthur Bryant in 1953.  Despite that, few will recognise the name of Boniface, and still fewer his Saxon name of Winfrith, who was born here in about 680.  He is known as the Apostle of Germany and his labours were responsible, more than any other, for laying the foundations of Christendom in northern Europe at the very time when southern Europe was facing the challenge of militant Islam.  Today he is recognised as the patron saint of both Germany and the Netherlands. 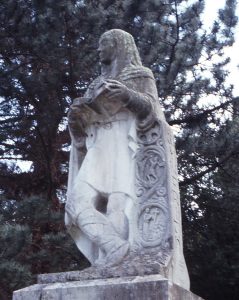 Boniface trained as a monk, first at Exeter and later at Nursling, near Southampton.  He went to Frisia in 716, but he was opposed by a pagan chief who refused him leave to preach and destroyed his churches.  He travelled to Rome to seek the personal authority of Pope Gregory II and then led fruitful missions to Hesse and Thuringia.  On one famous occasion he cut down an oak tree at Geismar which was sacred to the heathen god Thor, after which the gospel made rapid progress.  Destroying the idols of paganism, he founded monasteries and created bishoprics.  In 746 he was appointed Archbishop of Mainz, with authority over a wide area including the dioceses of Worms, Cologne and Utrecht.  He was on good terms with the Frankish kings, and personally conducted the coronation of Pepin, the father of Charlemagne.  His life and ministry can be said to have laid the foundations of the Holy Roman Empire.

In about 754, Boniface returned to Frisia and had assembled some converts for confirmation at Dokkum when a pagan mob broke into his camp and slaughtered the elderly saint and his companions.  He was buried at Abbey of Fulda which he had founded. 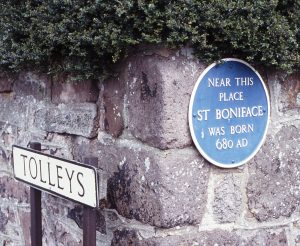 The rest of England may have forgotten Boniface, but Crediton has not.  He appears on the town sign and several streets and buildings bear his name.  The traditional site of his birthplace is marked by a blue plaque in a street called Tolleys, just off Mill Street.  In Crediton Parish Church (EX17 2AH) in East Street, the lower lights of the east window show scenes from the life of the saint, including the oak-tree incident and his eventual martyrdom.  There is a wooden statue in the south aisle and another stained glass window at the west end.  Immediately next to the church is the modern Boniface Centre in Church Lane, serving as the church hall and conference centre.

In 1960 a statue of Boniface was erected in Newcombes Meadow near the centre of the town.  The sculptor seems to have taken his name rather too literally; the word actually means "Doer of good deeds", but here he has a boyish, cherubic expression.  He appears in thonged sandals and a cape, book in hand, and leaning on a pillar which has roundels with scenes from his life.  The Roman Catholic Church of St Boniface has a sculptured relief of Boniface felling the oak tree.

The hymn writer Augustus Montague Toplady (1740-1778) spent the last twelve years of his short life at rural parishes in Devon.  From 1766 to 1768, he was curate of St Gregory's church (EX10 0NQ), between Sidmouth and Exeter, before transferring to Broadhembury, near Honiton, as vicar.

There is a memorial cross in the churchyard put here in 1913 on the shaft of a much older medieval cross.  It carries the words Nothing in my hand I bring, Simply to thy cross I cling. 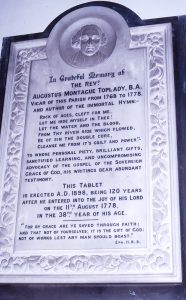 Along the broad main street, thatched cottages outnumber conventional ones by at least five to one.  In 1768, Augustus Toplady was appointed vicar of St Andrew's (EX14 3NF) and held the living for the rest of his life.  From 1775, he spent much of his time in London on account his health, and preached at a chapel in Orange Street near Leicester Square, which still stands.  A marble tablet in the sanctuary quotes the first verse of Rock of Ages and praises his piety, gifts and uncompromising advocacy of the gospel of the sovereign grace of God.

Those familiar with Toplady's life will recognise this reference to his strong Calvinism, on account of which he disputed with John Wesley, using some famously scurrilous language.  His profound and beautiful hymns also included A debtor to mercy alone and Object of my first desire.

The Gould family, later the Baring-Goulds, were lords of the manor here for generations, and the church has memorials going back to the seventeenth century.  We come in search of the Rev Sabine Baring-Gould (1834-1924), best known as the author of Onward Christian Soldiers.   He was vicar here for forty-three years, but his famous hymn was actually written in 1864 while he was curate of Horbury in Yorkshire, to march his Sunday School children into church.

In 1872, Baring-Gould inherited the family estates on the death of his father and appointed himself vicar of St Peter's Church (EX20 4PN) where he remained until his death.  While in Yorkshire, he had met and married a mill girl called Grace Taylor, by whom he had fifteen children.  In an age of class divisions, their marriage was remarkable and is said to have given Bernard Shaw the idea for Pygmalion.  As well as hymns, Baring-Gould wrote novels, travel books and theological works, and collected West Country legends and folk songs.

Sabine and Grace are buried on the west side of the churchyard, sharing a grave like a double bed, each with a cross at the head.   They lived at Lewtrenchard Manor, just opposite the church, which has the date 1626 above the front door and is now a hotel and restaurant.