The name means "field of the dead", referring to a legend that a thousand Christians were martyred here in the reign of the Roman emperor Diocletian around the year 300.  The present city has the air of a prosperous provincial town that wants to be recognised for its intellectual achievements rather than just commercial success.  It was the birthplace of Samuel Johnson, whose father owned a bookshop on the corner of the Market Place.  Johnson worked for a time as a teacher here and then set off for London with his pupil David Garrick, where they achieved fame as writer and actor respectively.  The scientist and philosopher Erasmus Darwin, grandfather of Charles, lived in the Cathedral Close. 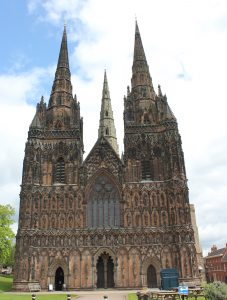 In Saxon times, Staffordshire was part of the kingdom of Mercia, which for a long time strongly resisted any Christian influence.  The heathen king Penda was the scourge of neighbouring kingdoms and in a series of battles killed no less than five Christian kings.  Penda's son Peada, however, accepted baptism on his marriage to the daughter of Oswy, Christian king of Northumbria.  From then on, Mercia was open to Christian missionaries and St Chad, a former pupil of Aidan on Lindisfarne, was appointed bishop in 669.  He chose Lichfield as the centre of his diocese, perhaps influenced by the legend of the martyrs.  Chad set about his duties with apostolic zeal, but died less than three years later.  He was buried in a Saxon church which probably stood on the site of the present cathedral.

Approaching Lichfield from any direction we can see four needle-sharp spires pointing to the heavens.  Three of them, known as The Ladies of the Vale belong to the Cathedral (WS13 7LD), the other to St Mary's Church, which occupies one side of the Market Place.  The first cathedral on the site was built around 700 in memory of Chad.  The present one is mainly thirteenth century, but was badly damaged in the Civil War and needed extensive repairs.  In the nineteenth century it was given a neo-gothic makeover by Sir George Gilbert Scott, which continued for fifty years.  The highly ornate west front has galleries of saints and kings arranged in tiers along the facade. 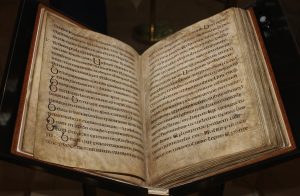 There are several memorials to Chad.  At the east end, in front of the Lady Chapel, a simple slab is set into the black and white marble floor at the former site of his shrine.  It was placed there in 1972, marking the 1,300th anniversary of his death.  On the floor of the presbytery is a tiled roundel showing Chad being ordered by Archbishop Theodore to ride a horse around his diocese. In the Chapter House are reproductions of illustrated pages from the Lichfield Gospels, a splendid illuminated manuscript dating from about 730, comparable to the more famous Lindisfarne Gospels.

St Mary's guild church, now used as a visitor centre, forms one side of the Market Place.  Statues of Johnson and his biographer James Boswell stand at opposite corners and we can visit Johnson's house - still used as a bookshop and museum.  Along the wall of the church are plaques describing various dramatic events which have taken place here.  These include the martyrdom of three Protestants in the reign of Queen Mary and at least one Catholic in the time of her half-sister Elizabeth.  In 1651, George Fox, newly released from prison, stood barefoot in the snow here to denounce the city and its inhabitants for their sins.  Their response is not recorded but it seems that Lichfield did not become a major centre of Quakerism.  The Friends found more fruitful fields elsewhere. 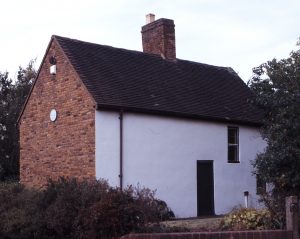 A small brick cottage stands incongruously beside Newton Road, a busy dual carriageway linking Sutton Coldfield and West Bromwich.  It was the boyhood home of Francis Asbury (1745-1816), who is better known in the United States than Britain.  In 1771, in response to an invitation by John Wesley, Asbury volunteered to serve the small but growing Methodist community in America.   Despite limited education, he proved a gifted preacher and organiser and was able to steer the infant church through the troubled years during and after the War of Independence.  Despite frequent illness, he travelled thousands of miles on horseback and saw the church grow from a few hundred members to over 200,000.

Ignoring the misgivings of Wesley, the American Methodists gave Asbury the title of Bishop and Bishop Asbury's Cottage next to the Malt Shovel Inn (B43 6HN) can be viewed by appointment.  The pub across the road called the Asbury Tavern has his picture on its sign. 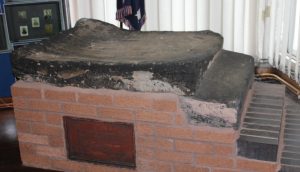 It was in this Black Country town in October 1743 that John Wesley had one of the most violent encounters of his life.  Attempting to preach in the town centre, he was assaulted by a mob, an event he described in great detail in his diary.  Some shouted Knock his brains out; down with him; kill him at once!, but a counter mob of supporters rose to defend him and fights between the two groups continued for much of the day.  As the night wore on, Wesley was dragged between the homes of two local magistrates, who each protested that he was in bed and couldn't attend to the matter.  Eventually he was led back to Wednesbury with rival groups from Darlaston and Walsall fighting it out along the way.  In typical style, Wesley reflected on the providence of God, in that he was not more seriously hurt, having lost only one flap of my waistcoat and a little skin from one of my hands

At this time and on later visits, Wesley used the steps of a mounting block on High Bullen as a preaching platform and these are now preserved in the Central Methodist Church in Spring Head (WS10 9AD), together with books, china and other items of Methodist memorabilia.

At West Bromwich, not far from Wednesbury, is Oak House Museum (B70 8HJ), a 15th century half-timbered farmhouse - a strange survivor in this industrial landscape.  A plaque on the wall records that Wesley preached in the courtyard in March 1774, more than thirty years after his experiences at Wednesbury. 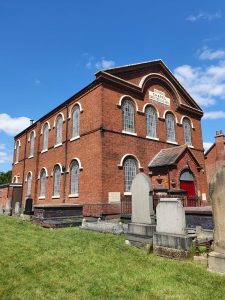 The Christian Heritage Centre occupies the former Providence Chapel in Bell End (B65 9LU).  The exhibits include Bibles, church furnishings and other memorabilia, and the centre hosts regular meetings and lectures to explain the significance of Christianity to many aspects of life in English history.  There are many display panels which, amongst other things describe the significance of the introduction of printing by William Caxton to the prodiction and distribution of Bibles, and the role of prominent Christians in science, education and social reform. For opening times and further details, consult www.christianheritagecentre.org.uk 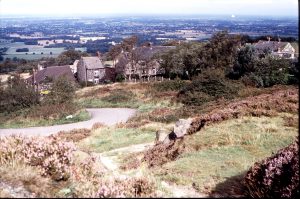 A windswept rocky outcrop, crowned by a folly representing a fragment of a ruined castle, seems an unlikely place for the start of a religious revival, but so it was.  The peak above the village of Mow Cop near Biddulph, now owned by the National Trust, gives a commanding view of the surrounding countryside in all directions.  Here on May 31st 1807 was held the first camp meeting of the Primitive Methodists, led by Hugh Bourne (1772-1852) and William Clowes (1780-1851).  An inscribed stone near the car park commemorates the event (ST7 3PA).

Bourne and Clowes were both men of the Potteries, born near Stoke-on-Trent.  As working men - Clowes was a potter and Bourne a wheelwright - they felt that mainstream Methodism had become too respectable in the years following the death of John Wesley.  Both had joined the Wesleyan Methodists on their conversion, but open-air camp meetings were officially forbidden by the Wesleyan authorities and Clowes and Bourne were expelled.  Between 1807 and 1811, their camp gatherings were so successful that the nucleus of a new denomination was formed at Tunstall, where a chapel had been built.  The movement spread so rapidly that both Bourne and Clowes lived to see the Primitive Methodists numbering more than 100,000 members.

There is an exhibition in the  Chapel Museum at Hillside, Chapel Bank, illustrating the social, industrial and religious history of Mow Cop.  A museum in a former chapel at Engelsea Brook in Cheshire tells the full story of the movement.

Just off the road between Biddulph and Stoke-on-Trent is the hamlet of Bemersley Green (ST8 7QT), which has a place in the history of Primitive Methodism.  Hugh Bourne, one of the founders, was born at Ford Hayes farm near Stoke-on-Trent and moved here in 1788 at the age of sixteen.   When not engaged on preaching missions, which took him all over the country including Scotland and Ireland and also to America, Bourne lived at Bemersley Farm and died here at the age of eighty.  For much of his life he earned his own living as a carpenter and builder.

The outbuildings of the farm were used as a printing press, where Bourne and his brother James published a monthly magazine, wrote and printed thousands of tracts and compiled their own hymn books.  The buildings have been converted for residential use, but it must be hoped that their former purpose will not be forgotten.