In the chancel of St Thomas a Becket Church lies William Bagshawe (1627-1702), known as the Apostle of the Peak.   He has an ornate marble memorial in the centre of the south wall, but the long inscription is barely legible (SK23 0EN).

Scion of a well known Derbyshire family - the name is still common in these parts - Bagshawe was born at Litton, near Tideswell.  He was ordained in 1650 and later presented to the living of Glossop.  Following the Act of Uniformity, which demanded acceptance of the 1662 Prayer Book, Bagshawe was one of 2,000 ministers ejected from their parishes.  More fortunate than most, he enjoyed a private income and retired to Ford Hall in the parish of Chapel en le Frith.

He continued to preach in his own home and those of friends, gradually extending his ministry to villages across the Peak District.  In these remote parts it was difficult to enforce the laws against itinerant preachers and magistrates often ignored the warrants against him.  One of the chapels he founded is Chinley Independent Chapel at Chapel Milton, by the railway bridge on the road to Glossop. 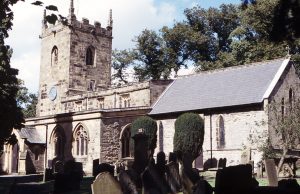 Many villages in England have interesting stories to tell but few are more tragic or poignant than that of Eyam.  In September 1665, a tailor called George Viccars, who lodged with a family living close to the church received a parcel of cloth from London, which carried the bubonic plague then raging in the capital.  Within a few days Viccars died, closely followed by three other members of the household.  The epidemic quickly spread to other homes and the leaders of the community realised that drastic action was required. 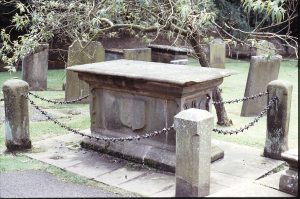 The vicar was William Mompesson (1639-1709), but a former vicar Thomas Stanley, who had been ejected in 1662, still lived locally.  Putting theological differences aside and rejecting a natural desire to flee to safety, the two men decided to put the entire village into quarantine.  No-one was allowed to leave or enter until the pestilence had passed, which took more than a year.  When it was all over, some 270 people had died leaving about 80 survivors, but Derbyshire had been saved.  Miraculously Mompesson and Stanley both survived, but Mompesson's wife Catherine was among the victims.  All gatherings of people were discouraged, so many burials took place in fields near the victims' homes rather than in the churchyard.  Scattered headstones around the village can still be seen.  Services in the church itself were suspended but open-air preaching took place on a grassy knoll known as Cucklet Church, in Flax Butts, just south of the village.

Today the whole village is a virtual shrine to the heroism of its forbears and attracts a steady stream of visitors.  Despite its tragedy, this is not a sombre or depressing place.  At St Lawrence's Church (S32 5QH), large display panels tell the story in full and there are facsimiles of the parish registers recording the deaths in each month of the epidemic.  After the initial outbreak, the mortality rate fell during the winter of 1665/66, but increased to a peak in July and August of 1666.  In the sanctuary is William Mompesson's chair, rescued from a second-hand shop in Liverpool, and a brass plaque on the north wall, put up in 1866, marks the two hundredth anniversary of the village's ordeal.

A modern stained glass window in the north wall shows personalities and scenes from the period.  One shows a young girl called Emmott Sydall and her sweetheart Roland Torre.  Roland came from a neighbouring village and, for a time, they would wave to each other in a wooded glade called the Delph.  Eventually, Emmott decided that their meetings must stop and Roland stayed away for several months.  When the plague was over he returned to find that Emmott was among its victims.  Heartbroken, he remained unmarried for the rest of his life.

In the churchyard, close to an eighth century Celtic cross, is the tomb of Catherine Mompesson, with a Latin inscription.  Against the wall of the church, a memorial slab to Thomas Stanley was erected by a subsequent vicar who perhaps felt that his part in the plague story had not been fully recognized. 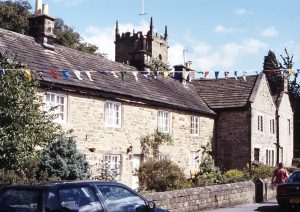 Immediately next to the church are the Plague Cottages.  In one, George Viccars, the tailor who received the bale of cloth, lived with the Hadfield family.  Mary Hadfield survived, but altogether she lost nineteen relatives.  The next door cottage was the home of Peter Hawkesworth, who became the third plague victim.  One of his relatives, Jane Hawkesworth, survived, but lost twenty-four members of her extended family.  All around the village, cottages dating from that period carry green plaques, listing victims - eight members of the Thorpe family here, a dozen of the Sydall family there.  The present occupants show great forbearance as inquisitive tourists peer into their homes and gardens.  One cottage was the home of the Merrill family, where it is recorded that the son survived by building himself a shack at an isolated spot on the Eyam moor, and stayed there for many months with only his pet cockerel for company. 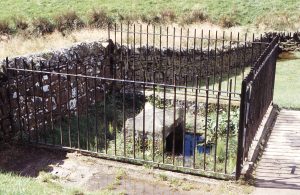 The Eyam Museum, opposite the car park in Hawkhill Road (S32 5QP), has displays of the geology of the area and other aspects of local history, as well as giving the full story of the plague.

During the plague months, Mompesson arranged for food and other essentials to be left at strategic places.  One of these was a well on the road to Grindleford, now called Mompesson's Well.  It can be reached via a steep footpath from the churchyard or by road, turning right along The Edge from Hawkhill Road.  Showing a prescient awareness of how diseases are transmitted, Mompesson would leave money in the water, adding vinegar as a disinfectant.