Berkshire has been described unkindly, but not altogether unfairly, as a perpetual slip-road to the M4.  Places with links to the theme of this guide are correspondingly few, and even some of these have been unceremoniously shifted to other counties by boundary changes.

Currently encircled by reservoirs, motorways and the western fringe of London Heathrow, Horton is an unlovely place, despite being just three miles from Windsor Castle.  Whether it was any better when John Milton (1608-1674) lived here is hard to tell.  Milton's father had retired to Byrken Manor House and the poet wrote L'Allegro, Il Pensoroso, Comus and Lycidas while living there between 1632 and 1640.  The house was pulled down in 1795.

There is a memorial window to Milton in the church, which is normally kept locked, and his mother Sara was buried in the chancel in 1637. 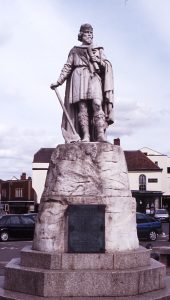 Wantage used to be in Berkshire, but the wiles of bureaucracy have transferred it to Oxfordshire.  We prefer to leave it where it was, but for our purposes this is Wessex, and here in 849 was born its greatest king, Alfred the Great.  His statue stands in the broad central Market Place (OX12 8AW).  It is the work of HSH Count Gleichen - a continental nobleman with a taste for sculpture - and was unveiled in 1877.  Alfred stands with battleaxe in one hand and parchment scroll in the other, symbolising his dual career of warrior and lawgiver.  The inscription celebrates his contribution to learning, education, law, the church and the defence of his realm.

Wessex covered most of the South and West of England, and Alfred was forever on the move, fighting the invading Danes, founding monastic schools and dispensing justice.  One of his most important battles was fought close to his birthplace, somewhere on the downs between Wantage and Reading.  At the Battle of Ashdown in 871, Alfred's brother Ethelred was still king, but Alfred led the attack while Ethelred prayed - recalling the tactics of Joshua and Moses against the Amalekites.  The result was a resounding victory in which a Danish king, five jarls and hundreds of men were slain.  The battlefield was somewhere near Blewbury - the name Ashdown probably being related to that of the nearby villages of Aston Tirrold and Aston Upthorpe.