Cumbria combines the historic counties of Cumberland and Westmorland but for our purposes this is Quaker country.  Quakers themselves call it 1652 Country and arrange visits to the scenes of George Fox's labours in that pivotal year in the history of the Society of Friends.   The county includes, of course, the incomparable Lake District, for centuries regarded by travellers as a dark and forbidding place but seen in new light by Wordsworth and the romantic poets and beloved by artists and holidaymakers ever since. 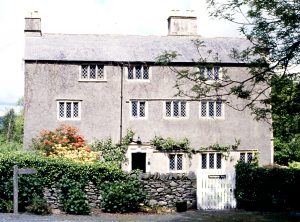 An old house just south of Ulverston holds the same place in the affection of Quakers as Epworth Old Rectory does for Methodists.  Swarthmoor Hall (LA12 0JQ) was built by George Fell in 1586, and in 1632 his son Thomas, a rising lawyer, brought his teenage bride Margaret Askew here, where they raised a family of nine children.  She was born at Marsh Grange, near Askam-in-Furness.

Deeply pious, Margaret Fell (1614-1702) and her husband offered hospitality to strangers, including travelling preachers.  In 1652, she entertained George Fox, who had recently had an intense spiritual experience at Pendle Hill in Lancashire.  He expounded the principles of Quakerism which he had been formulating through prayer and meditation and Margaret became a fervent disciple.  Her husband, now a judge, was away on legal business at the time but arrived home to find his wife and children "quiet and still" in accordance with the disciplines of their new faith.  He was tolerant man in an intolerant age and allowed meetings in his house, but never became a Quaker himself.  Fox's visit marked the point where Quakerism developed from scattered groups meeting in isolation into an organised movement.

In 1658 Judge Fell died and Swarthmoor Hall became the centre of growing Quaker activity.  The house served as a base for Friends on preaching missions, riding across the sands of Morcambe Bay at low tide, and a refuge during times of persecution.  All of Margaret's seven daughters married Quakers and in 1669, after eleven years of widowhood, Margaret herself married George Fox.  She had already supported him in his labours and shared his sufferings.  When Fox was arrested, she went to London to plead with Charles II on his behalf, but she herself was arrested in 1663 for allowing Quaker meetings in her house.  Confined in Lancaster Castle, she was not finally released until 1668, after which she visited all the prisons in which Quakers were held.  Surviving her second husband by eleven years, Margaret died in 1702 at the grand old age of eighty-eight, revered as the heroic mother figure of Quakerism. 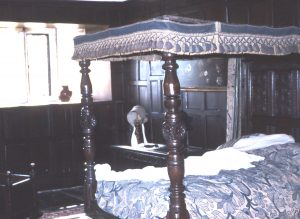 Swarthmoor Hall remained in the Fell family until 1759, but was then let out to tenant farmers and gradually fell into disrepair.  In 1912, it was bought by a descendant of Margaret Fell's youngest daughter, and reconstruction work was begun.  In 1954, it was acquired by the Society of Friends and is now used as a Quaker Visitor Centre.  The building is now only about half its original size.  On the east side a large bay window extends through three floors, and there is a wooden balcony replacing one from which George Fox is said to have preached.  As befits its heritage, the gardens are neatly kept and convey an ambience of peace and harmony.

Most of the furnishings of the house were lost during the period of disrepair, but contemporary articles have been collected to recreate the seventeenth century style of the Great Hall.  Adjoining it is Judge Fell's study where we can see George Fox's copy of the Great Bible, the Coverdale translation of 1541.  There is also a chair in which the American Quaker and philanthropist John Woolman died at York in 1772. On the first floor, two bedrooms have the original oak panelling and there is a four-poster bed which was probably constructed in situ and has been here ever since.   Another bedroom, called George Fox's room, has his original bedstead and two oak chests, one of which he took with him on his journeys to America and the West Indies in 1672.

About a quarter of a mile from the Hall is Swarthmoor Meeting House, built on Fox's instructions in 1688. 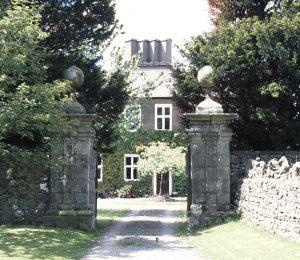 In 1614 Margaret Fell, the daughter of John Askew, was born at Marsh Grange, an impressive house lying down a narrow lane off the A595, two miles north of Askam.  Still privately owned, the house can be seen from the road beyond two massive gateposts, each topped by a large stone ball. 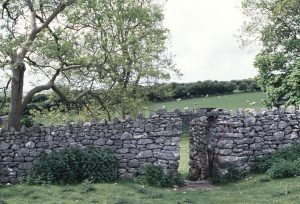 About three miles south of Ulverston, on the edge of the beautiful Birkrigg Common, is the Quaker burial ground, where Margaret Fell was laid to rest in 1702.  It is a walled enclosure with a linteled entrance, virtually adjoining Sunbrick Farm (LA12 9RE).  There are no headstones and sheep graze here freely, but an inscription on a rock records its place in the Quaker story. 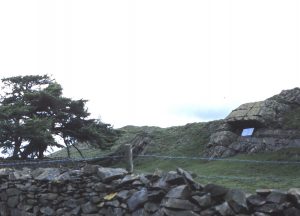 On the 13th June 1652, George Fox preached for three hours to a thousand "seekers", using a rock on this remote fell as an impromptu pulpit.  Looking around, one may wonder where they all came from and how they got here, but it must be assumed that scattered farmsteads among the surrounding hills provided a larger population than today.  It was the start of a movement which gave him a following of some 20,000 Friends in Cumbria alone.

To find the place we have to take the very narrow Shacklabank Lane (LA10 5 EL) directly opposite the junction of the B6256 and the A684 and across a stone bridge (not the equally narrow road to Firbank village).  Fox's Pulpit is about a mile and a half along here on the crest of the hill.  An inscription commemorates the event and records that in the years following, many Quakers went forth through the land and overseas with the living word of the Lord enduring great hardships and winning multitudes to Christ.  Close by is an area enclosed by dry stone walls where a Quaker chapel once stood.  It now serves as a horses' paddock but a few headstones can still be seen. 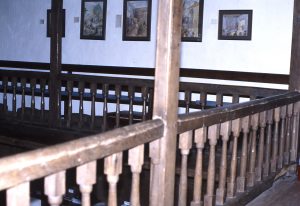 Just south of Sedbergh is the hamlet of Brigflatts, another important stopping place on the Quaker trail.  The place seems to have barely changed in three hundred years, but a few houses carry dates as late as the eighteenth century!  The Friends Meeting House (LA10 5HN), dating from 1675, is the genuine article - small, square, with a flagstone floor, dark wooden benches and panelling and a wooden gallery.  There are even facilities for visitors to make themselves a cup of tea.  The house visible from the garden of the chapel was the home of Richard Robinson, where Fox stayed in June 1652.  A short distance away is the Friends burial ground, overgrown but with neat rows of identical headstones poking through the vegetation - no-one allowed to exalt themselves in death any more than in life.

After Fox himself, Quakerism's most famous son was George Whitehead (1636-1723).  He is believed to have been born at Sunbiggin, a farming hamlet about three miles east of Orton, but there is no memorial.

Falling under Fox's spell in his youth, he laboured indomitably for 65 years for the rights of Quakers and others to enjoy religious freedom, and personally pleaded their cause before six sovereigns.  He was imprisoned in Norwich Castle where he almost died of gaol fever, and - like Bunyan - spent much of the time between 1661 and 1672 in prison.  In Saffron Walden, he was put in the stocks and publicly whipped.  On the accession of James II in 1685, he personally secured the release of many hundreds of Quakers from prison and the reversal of financial penalties against them.  When James was replaced by William and Mary, he negotiated liberty for Quakers in the Act of Toleration.  Whitehead's literary gifts and clear-headed legal knowledge helped to establish the Quakers on a sound civil and political foundation.

The Friends Meeting House, built in the early nineteenth century, stands on Stramongate, close to the centre of the town overlooking the River Kent (LA9 4BH).  It now houses a permanent exhibition of Quaker life, including the magnificent Quaker Tapestry, the work of many hundreds of hands in fifteen different countries.  In over fifty hand-crafted panels, it illustrates the history of the Quaker movement since 1652, including the early labours and sufferings of George Fox and the lives of Elizabeth Fry and William Penn.   Other panels show the later involvement of Friends in industry, commerce and banking, and ongoing work for peace, welfare and international relief.  There is also an exhibition of Quaker costume and courses on embroidery are held regularly.

The village lies at the head of a remote valley, some ten miles north-west of Kendal.  At Kentmere Hall, now a farm, were born generations of the Gilpin family who achieved distinction in many fields, including art, medicine and literature.  Bernard Gilpin (1517-1583) studied at Queen's College, Oxford, was ordained in 1542, and gradually came to adopt the doctrines of the Reformation.  He was appointed rector of Easington in Durham and later rector of Houghton le Spring, which provided great wealth and influence.  His preaching journeys in Northumberland and Yorkshire earned him the title Apostle of the North.  His Protestant opinions brought him to the attention of Queen Mary's agents and he was arrested.  While being escorted to London to face trial he broke his leg, and by the time he had recovered the Queen had died.

St Cuthbert Church (LA8 9JL) is one of the many places where that saint's body is said to have rested on its long and circuitous journey to Durham, but the legend is unproven.  It looks unimpressive from the outside but is bright and cheerful within.  A bronze plaque by the pulpit made at the Keswick School of Industrial Arts in 1901 celebrates the life of Bernard Gilpin, describing him ...as saintly as he was brave, as generous as he was just, as practical as he was enthusiastic.

The town is well known as the venue for one of the oldest and most successful Christian conventions, which has inspired lookalike versions in many parts of the world.  The Convention was founded in 1875 by Thomas Harford Battersby (1823-1883), vicar of St John's church, and Robert Wilson, a Quaker industrialist.  Held annually in July, it has weathered many doctrinal storms and remains a source of sound Biblical teaching. 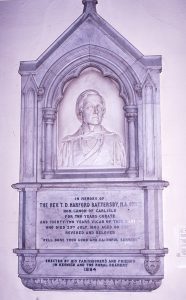 There is a marble memorial to Battersby in the south aisle of St John's Church (CA12 4DD), recalling that the aim of the first meetings, held in tents set up in the parsonage grounds, was the promotion of practical holiness amongst Christians.  The family burial plot is against the west wall of the church.

Robert Wilson, born at Kendal, lived at Great Broughton, near Cockermouth.  Brought up in the Society of Friends, he was sufficiently ecumenical to supervise the Baptist Sunday School and attend his Parish church on Sunday evenings.  Early in its history, the Convention began to encourage and support missionary work and one of its first candidates was Wilson's adopted daughter Amy Wilson Carmichael, who sailed for India in 1895 and worked with children at Dohnavur for the next 55 years.