Despite an abundance of secular tourist attractions, including Shakespeare's Stratford-on-Avon, Warwick Castle and Charlecote Park, there is little of specific relevance to our theme within the county.

Squeezed between the urban sprawl of Birmingham and its airport, this village is not a natural tourist destination. Thomas Bray (1656-1730) came here as rector in 1690.  In 1695 he began a scheme to provide parish libraries throughout England and America, which led to the formation of the Society for Promoting Christian Knowledge.  In 1699 he went to Maryland to start a mission, returning the next year to found the Society for the Propagation of the Gospel.  These are two of the oldest Anglican missionary societies, both still active today.  There is a tablet to Bray in St Giles Church (B26 3TT). 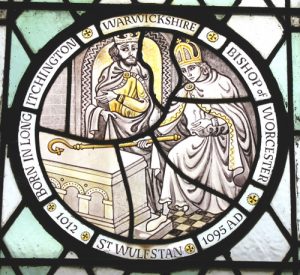 This village was the birthplace of  St Wulfstan (1008-1095) a thousand years ago and there are some cottages which look as if they have stood for half that time.  The millennium has prompted the community to remember him in various ways.  Holy Trinity Church (CV47 9PN) has made new memorial kneelers for the altar rail in the south aisle.  There is also a stained glass roundel to the saint in the window just above.  A new statue has been commissioned for St Wulfstan's Hall in the village.

Wulfstan was bishop of Worcester at the time of the Battle of Hastings and was the only Saxon bishop to retain his see under the Normans.  He supported Harold, but after the conquest was loyal to William the Conqueror and his son William Rufus.  It is said that the Conqueror's new Archbishop Lanfranc was going to deprive him of his see, but Wulfstan placed his crozier firmly on the shrine of Edward the Confessor in Westminster Abbey and gained a reprieve.  He helped with the production of the Domesday Book and for thirty years strove for reconciliation between Saxons and Normans.  We tell his story in more detail at Worcester. 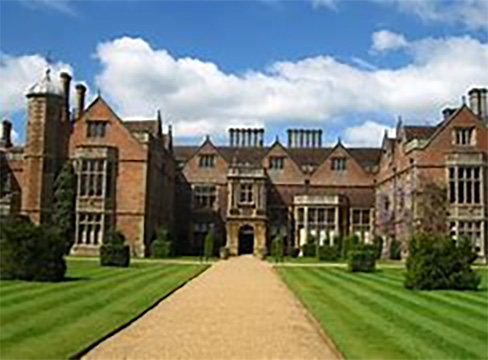 Tourists come in large numbers to admire Charlecote Park (CV35 9ER), ancestral home of the Lucy family and now owned by the National Trust.  Most will be told the unconfirmed story that the youthful William Shakespeare was apprehended for poaching a deer in the park. The River Avon runs right past the house, which lends some credibility to the tale if the poaching poet gained access  by water from Stratford.