The city attracts tourists from across the world and is famous for its virtually intact city walls, its ancient shopping arcades known as The Rows and its fine cathedral.  Running in a two-mile circuit around the centre, the walls have sections up to seventeen feet high, some parts dating back to Roman times. 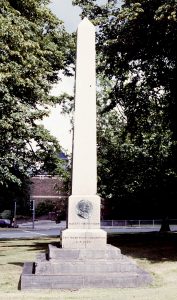 The renowned Bible commentator Matthew Henry (1662-1714), one of the last of the true puritan scholars, was born at Broad Oak across the border in Wales, but spent much of his life here.  He lived in Whitefriars, leading off from the corner of Bridge Street and Grosvenor Street.  There are several houses which look old enough to have been here in Henry's time, but no blue plaque to identify which, if any, was his.  Much of his writing was done in his summer house in Bollands Court, which was still standing in the twentieth century but has now gone.  Henry is commemorated by a granite obelisk with a bronze medallion portrait, erected on the roundabout in front of the Crown Court and Castle on Grosvenor Street (CH1 2DD) in 1860.

Son of Philip Henry, a Puritan divine ejected from his living by the Act of Uniformity, Matthew Henry trained as a lawyer.  In 1687 he came to Chester on business, but preached in private houses and was asked to stay as minister.  He was privately ordained as a Presbyterian in London.  A Meeting House was built for him in Crook Street in about 1700, and a Matthew Henry Memorial Church was erected in Trinity Street in the nineteenth century, but both have long since been demolished.

Henry died in Nantwich of injuries received from falling off his horse following a preaching engagement.  He had completed his Bible commentary as far as the book of Acts, but the remainder had to be finished by his fellow ministers using the notes he had left.  He was buried in the former Holy Trinity Church in Watergate Street, but this has now been deconsecrated and is used as the Guildhall.  A Latin memorial inscription to Henry is presumably covered by the wooden panelling.

In the time of the Catholic Queen Mary, Chester had its own martyr.  He was George Marsh (1515-1555), a native of Deane near Bolton, who attended Cambridge University and continued to live there after his ordination.  Under suspicion for his Protestant views, he intended to flee to the continent but went back to Lancashire to take leave of his relatives, but was arrested and committed to prison at Lancaster.  Brought to Chester, he was held for a time in dungeons cut into the rock below Northgate.

After examination in the lady chapel of the Cathedral, Marsh was burned at the stake in Boughton, on the main road out of the city to the east.  Here, a granite obelisk beside the road, overlooking the River Dee (CH3 5UL), commemorates George Marsh, burned to death for the truth's sake, April 24th 1555. 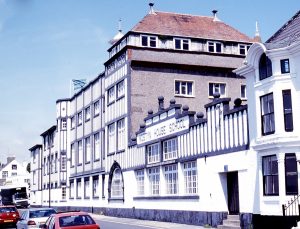 The bold black and white facade of the former Mostyn House School looks out over a mile or so of marshes and mudflats flanking the estuary of the river Dee (CH64 5SL).  In the eighteenth century, boats could pull up here and Parkgate was a thriving port.  The house functioned as an inn, serving passengers for the Ireland ferry, including John Wesley.  A notice board on the disused quay records that Wesley made several crossings between 1760 and 1789.

By the nineteenth century, the port had silted up and Mostyn House became a school, but has recently been converted into flats.  In the eighteen-sixties the headmaster was the Rev. Algernon Grenfell, whose son Wilfrid Grenfell (1865-1940) was born here.  As can be imagined from the setting, young Wilfrid quickly gained a love of the open air, walking and wildfowling across the marshes.  He would shoot ducks and then swim out to retrieve his quarry. 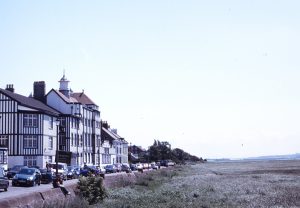 Mostyn house and the Dee estuary

Training as a doctor at the London hospital, Grenfell was converted at a Moody and Sankey meeting and worked for five years with the Mission to Deep Sea Fishermen.  While still a medical student he would gather parties of boys from the London slums and take them on canoeing and sailing holidays (years before Baden Powell had the same idea).

In 1892 he set off for Labrador, where his open-air life stood him in good stead.  For over forty years he suffered discomfort and danger, serving isolated and poverty-stricken fishing communities along the unforgiving coasts of Labrador and Newfoundland.  By the time he retired, the fruits of his labour included five hospitals, seven nursing stations, four hospital ships, three boarding schools and various industrial centres.

Bishop and hymnwriter Reginald Heber (1783-1826) was born at the rectory here and attended Whitchurch Grammar School.  Heber's father was rector of Malpas but later inherited the Hodnet Hall estate in Shropshire.   Before being appointed Bishop of Calcutta, Heber became rector of Hodnet, where we tell his story in more detail. 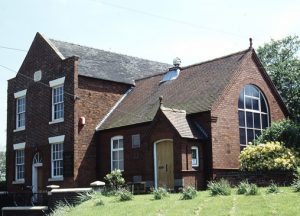 As so often in church history, when one movement becomes too settled,  complacent or respectable, another rises up to challenge it, more vibrant, energetic and radical.  This is the story of the Primitive Methodists, whose history is celebrated at the Englesea Brook Heritage Centre (CW2 5QW).

Up a narrow lane from Balterley Heath, between Nantwich and Stoke-on-Trent, is a chapel and small cemetery, now serving as a museum of the movement.  The centrepiece of the burial ground is a memorial to Hugh Bourne (1772-1852), co-founder of Primitive Methodism, who lies here.  It records that at his death he left a church with over 109,000 members and 9,916 lay preachers. 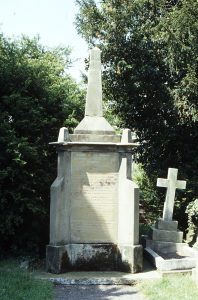 Across the road, half the building is preserved as a typical chapel, complete with pulpit, gallery, cast iron stove and effigies in contemporary dress.  As you enter, an organ in the vestibule, the first ever installed in a Primitive Methodist chapel, is activated automatically to play a welcoming tune.  The Sunday School alongside serves as museum, with exhibits including an early printing press for hymnbooks, commemorative pottery and personal items belonging to Bourne and his co-founder William Clowes (1780-1851), a potter from Burslem.  Of these, perhaps the most interesting are Bourne's boots - extremely well worn and extended to accommodate his feet, swollen by long preaching journeys on foot.  The Primitive Methodists allowed women preachers, among whom was Elizabeth Evans, aunt of the novelist George Eliot, who was the model for Dinah Morris in Adam Bede. 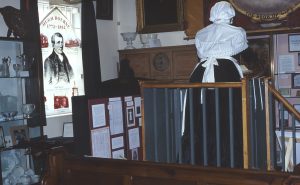 The movement began in 1807, with open air camp meetings at Mow Cop, a rocky outcrop just across the border in Staffordshire.  Bourne and Clowes began as lay preachers within mainstream Methodism, but by 1810 they had both been expelled on account of their methods and activities, including the use of women preachers.  Their first chapel was at Tunstall in Staffordshire.  From 1811, meetings were held in a private house at Englesea Brook, and the present chapel was built in 1828.  The Sunday School extension now housing the museum was added in 1914. 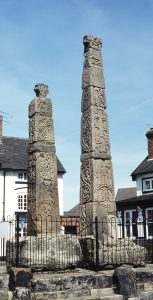 In the cobbled Market Square, surrounded by several pubs, stand the remains of two Saxon crosses looking rather the worse for wear after 1,300 years (CW11 1AT).   They are thought to commemorate the conversion of the Mercian kings to Christianity in the seventh century.  Penda (577-655) was a heathen who had killed five Christian kings in battle, but was eventually slain by Oswy, king of Northumbria.  Penda's son Peada, however, embraced the new faith and married Oswy's daughter.

The crosses were broken up in Cromwell's time, but in the early nineteenth century the pieces were collected and reassembled with a few inserts to fill the gaps.