Before the industrial revolution, Norwich was one of our largest cities outside London and remains among the most beautiful.  The magnificent Cathedral, the Castle Museum with its excellent natural history and art collections, and the superb parish churches draw visitors from far afield.  There are no less that thirty-two medieval churches close to the centre, some inevitably now put to other uses, including a bookshop and a puppet theatre.  St Peter Hungate at the top of Elm Hill houses a museum of ecclesiastical art, and contains copies of several early Bibles, including a Bishops' Bible of 1568, Coverdale's Bible of 1582 and an incomplete copy of Wycliffe's Bible in manuscript. 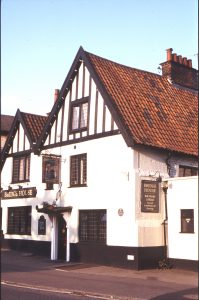 On the east side of the city is Bishopgate, where Bishop Bridge crosses the river Wensum.  Just beyond this was Lollards Pit, where Protestant martyrs suffered death at the stake, including the gentle Thomas Bilney on August 19th, 1531.  A plaque on the wall of the Bridge House pub (NR1 1TA) marks the spot and a stone slab set into the embankment by the river lists the names of those who loved not their lives unto death.  The name Lollards Pit derives from a follower of John Wycliffe called William Whyte, who died here in 1428.

Bilney was a Norfolk man born around 1495, possibly in the village of that name.  He went to Cambridge University and his reading of Erasmus' translation of the New Testament led to his conversion.  He may have found peace with God, but scarcely with the world.  Brought to trial for heresy, Bilney recanted his views.  He was not looking for a martyr's crown, but neither could he live with a troubled conscience.  Again he took to the fields and streets of East Anglia, preaching the new doctrines, and this time he was arrested, tried and burned.  Many historians regard his conversion as the start of the Reformation in England and Bilney as its spiritual father and first true martyr.

For a time Bilney was held in the dungeon of the Guildhall, on the north side of the Market Square. This is a fine example of early civic architecture built between 1407 and 1413 and still in use.  His main antagonist was the blind, octogenarian bishop, Richard Nix, whose tomb can be seen in the cathedral.  After witnessing Bilney's death, Nix is said to have exclaimed  I fear I have burned Abel and let Cain go.

Despite the preponderance of Anglican churches in Norwich, there is a strong vein of nonconformity.  Perhaps inspired by the memory of Bilney, the people of Norwich have often resented church authority whether Roman Catholic or Anglican.  More resentful than most was Robert Browne (1550-1633), the turbulent advocate of Independency (the right of churches to separate from the Church of England) in Elizabethan times who lived and preached here, until his views drove him into exile in Holland.

John Robinson (1576-1625) was for a time lecturer at St Andrew's Church, before leaving to become pastor of an independent congregation.  This later formed the nucleus of the Pilgrim Fathers, although Robinson did not join them on their historic voyage to America. 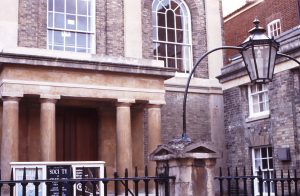 Quakerism in Norwich began with the preaching journeys of the eighteen-year-old George Whitehead in 1654.  He was the friend and lieutenant of George Fox and suffered frequent opposition and imprisonment for his beliefs.  In 1661 he was imprisoned in Norwich Castle where he nearly died of gaol fever.  The fruit of his sufferings was a strong Quaker tradition in the city, with the first Meeting House opened in Upper Goat Lane in 1678.  Land for a Quaker burial ground in Gildencroft was purchased in 1670, with a second chapel on this site opened in 1698. 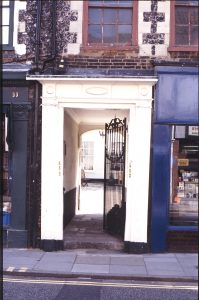 To the North of the city centre is Magdalen Street, with its exotic mixture of Asian restaurants, second-hand shops and ethnic arts emporia.  The area has a rather down-at-heel appearance, but between the shops are interesting little courts and yards, some clearly derelict, others well restored.  On the east side, between numbers 31 and 33 is Gurney Court (NR3 1NF), with fluted pilasters forming a narrow classical-style entrance leading to a quiet cobbled courtyard.  On May 21st 1780, Elizabeth Fry, daughter of John Gurney, was born here, although the family later moved to Earlham Hall, just outside Norwich.  By coincidence, the writer Harriet Martineau (1802-1870) was also born in the same house.  In the alleyway leading to the courtyard, are plaques with medallion portraits of the two women.   Elizabeth Fry, we are told, founded an association for improving the conditions of female prisoners in Newgate in 1817, which resulted in a complete change of prison management in this and other countries.

The Goat Lane Meeting House (NR2 1EW) dates from 1826 and replaces one that Elizabeth Fry attended as a child. It lies behind wrought iron railings, with a lamp above the gates and extensions on both sides forming a small courtyard.  Inside, plain wooden benches face the centre and there are no memorials or inscriptions. For the Quakers, simplicity is all, with no concessions to human pride. 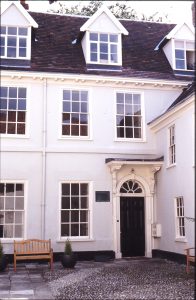 The Gurneys would travel in from Earlham by coach each Sunday and the lively daughters of the family regarded the two-hour meeting at "Goats" as a tedious interruption of their gay lives of dance and conversation.  For seventeen-year-old Betsy, however, all that changed on 4th February 1798 when William Savery, a visiting Friend from Philadelphia spoke in the morning at Goat Lane and in the evening at Gildencroft, and later visited the Gurney home.  Although there was no instant conversion, Elizabeth Gurney's life was never the same.  She gradually abandoned the theatre and the dance floor for the simple dress and speech of the Quakers, devoting her life to prison reform and bringing up a large family.

Norwich's other Quaker meeting house, the Gildencroft, is at the end of Chatham Street, just north of the inner ring road (NR3 3DN).   Built originally in 1698, it was destroyed by fire in an air raid in 1942 and reopened in 1958.  Looking rather run down, it is now used as a pre-school nursery.  The adjacent Friends Burial Ground is now overgrown in the interests of nature conservation.  In the Quaker spirit of equality, the headstones are all identical, giving just the name, age and dates of the deceased.  Whatever differences of wealth or status they enjoyed in life, the Quakers were all equal in death, with no elaborate tombs or fulsome epitaphs to honour those who could afford them.  One plot in the far right corner is devoted to the Gurney family, where many of Elizabeth Fry's relatives lie buried.

In Colegate, just off Magdalen Street are two early buildings, representing different non-conformist traditions.  The Old Meeting House is an Independent or Congregational Church, founded in 1643 by William Bridge, one of the ministers who drew up the Westminster Confession of Faith (see www.oldmeetinghousechurch.org.uk).  Just next to it is the Octagon Chapel, opened by John Wesley in 1756 as one of the first Methodist chapels, and now used by a Unitarian church (NR3 1BN). 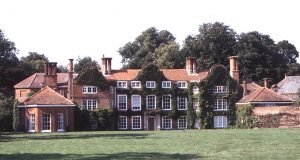 Just east of Norwich, Earlham Hall (NR4 7TJ), once the home of the Gurney family, now accommodates the Norwich Law School and provides office space for the University of East Anglia.  The building, dating from 1642, has flint and brick facing, with wings in red brick added later.  With walls covered in wisteria and Virginia creeper, it retains much of the atmosphere of a country house, complete with old stables, walled gardens and open parkland sloping down to the River Yare.  The modern concrete and glass university buildings stand some distance away.  The house is not open to the public but the grounds provide a useful amenity for the local community.

In the 1790s the house and gardens would have echoed to the cries of the eleven Gurney children as they played and plotted, brought up largely by eldest sister Catherine after their mother's early death.  At least four members of the family achieved prominence in later life. Elizabeth Fry, as she became on her marriage, is best known for her pioneering work with female prisoners.  Hannah married Sir Thomas Fowell Buxton, who inherited the mantle of William Wilberforce in the fight against slavery.  Wilberforce was a friend of the family and the youngest brother Joseph John was also prominent in the anti-slavery movement.  Samuel Gurney became a highly successful banker, whose wealth helped to finance the philanthropic activities of his siblings.

About two miles along the road towards Cromer from the village is Northrepps Hall (NR27 0JW), set in extensive grounds.  The house is privately owned and can only be viewed from the road.  This was the home of Thomas Fowell Buxton (1786-1845) and his wife Hannah, sister of Elizabeth Fry.

Buxton entered parliament as MP for Weymouth in 1818 and was involved in many charitable projects including education, prison reform and opposition to slavery.  He acted as the leader of evangelical opinion in parliament in succession to Wilberforce.  He lost his seat in 1837, refusing to use bribery to secure votes.  A project to promote legitimate trade with Africa as an alternative to slavery failed when many members of an expedition to the Niger died of disease.  In later life his health gave way and he retired to Norfolk to promote land improvement schemes.

Buxton and his wife are buried in the south aisle of St Martin's Church, Overstrand (NR27 0NY), a short distance from Northrepps through a shady beech wood.  Their stone carries the text More than conquerors through Him that loved us.  A memorial tablet on the wall above the family vault remembers Buxton's philanthropic work. 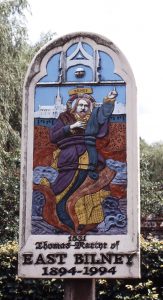 The village lies on the B1146 between East Dereham and Fakenham and is believed to be the birthplace of Thomas Bilney, one of the first Protestant martyrs of the Reformation, burned at the stake in Norwich in 1531.  An impression of the event appears on the village sign.  The church of St Mary, which stands amid open fields about half a mile outside the village, has a stained glass window commemorating Bilney's life (NR20 4HN). 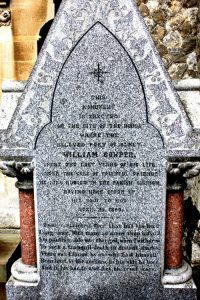 Outside the Cowper Memorial Evangelical Church in the market place is a granite memorial telling us that the gentle poet William Cowper (1731-1800) spent his last years here and died in a house on the site.  In fact, half of the original house still stands, converted into a shop.  The remainder was demolished to build the church.

Cowper is buried in the north transept of St Nicholas Church in Church Street (NR19 1DN).  There is an epitaph set into the floor and a stained glass window depicting the poet surrounded by the things he loved - his books and flowers, dogs and hares.  On the wall are stone tablets commemorating Cowper and Mary Unwin (1724-1796), his devoted friend who is also buried in the north aisle here. 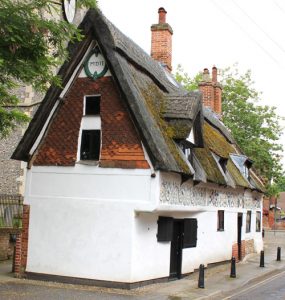 By the church gate is a row of thatched dwellings known as Bishop Bonner's Cottages.  The name is taken from Edward Bonner who became vicar here in 1534.  He was appointed Bishop of London in 1539, but was replaced by Nicholas Ridley under Edward VI, only to be reinstated by Queen Mary.  His role in the persecutions of Mary's reign is controversial.  Regarded by some as a principal agent in the burning of Protestants, others consider him to have been an influence for moderation.

The cottages are dated MDII (1502) and have decorative pargetting with trailing flowers and vines on the outside.  Inside the space has been combined to make a small museum illustrating local life and history.  The exhibits include items relating to William Cowper and some early editions of his books.