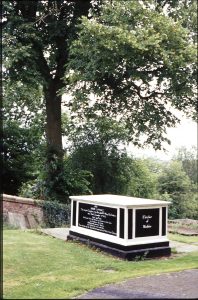 Madeley is an odd-shaped village with an odd-shaped church, on the outskirts of Telford new town.  Down Church Street from the shopping centre, St Michael's Church is an octagonal building on a slight rise with the churchyard sloping down behind (TF7 5BN).  It was built for the saintly John Fletcher (1729-1785), who served here for twenty-five years, he but did not live to see it completed.

Fletcher is a strange figure in the story of the evangelical revival.  Born Jean Guillaume de la Flechere in Nyon, Switzerland, he came to England as tutor to the sons of Thomas Hill MP of Tern Hall (now Attingham Park) at Atcham, near Shrewsbury.  Coming under the influence of the Methodists, he formed a society with a "pious domestic and an excise officer".  Anglicising his name, he took Holy Orders and was appointed to the living of Madeley in 1760.   The parish was remarkable for nothing else than the ignorance and profaneness of its inhabitants, and at first the well-born Swiss gentleman found his congregation of rough miners and illiterate farmers hard work.  He faced opposition from Catholic gentry, local innkeepers and neighbouring clergy. 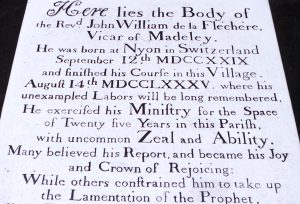 But Fletcher persevered.  Above all, it was his transparent holiness which people noticed and his ability to expound the scriptures, albeit with a continental accent.  He became so intimately associated with the place that he is known to history as Fletcher of Madeley, the title inscribed on his tomb.  As a close friend and supporter of John Wesley, he was destined to succeed him as the leader of Methodism, but the more robust Wesley outlived him by several years. 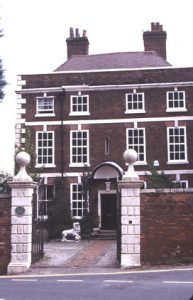 Fletcher's tomb is immediately to the south of the church, painted distinctly in black and white.  Unusually, but appropriate to this cradle of the industrial revolution, it is made of cast iron (Ironbridge and Coalbrookdale were part of the parish).   His enigmatic epitaph reads He exercised his ministry for the space of twenty-five years in this parish with uncommon zeal and ability.  Many believed his report and became his joy and crown of rejoicing:  while others constrained him to take up the lamentation of the prophet - All day long have I stretched out my hand to a disobedient and gainsaying people.  There are also inscriptions to his wife and an adopted daughter.  Inside the church, there is memorial plaque to the saintly Fletcher in the chancel. 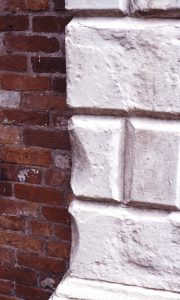 Grooves in the gatepost

Just outside the churchyard gate is the former rectory.  It is a handsome three-storey building but strangely, much of the front is bricked up, with imitation windows painted onto the brickwork.  The sturdy white gateposts are topped by stone balls, and here there is a fascinating link with Fletcher's time.  Such was the power of his preaching that men would walk for twenty miles to hear him.  Setting out early in the morning they would arrive hungry and settle down in the churchyard for a meal.  To cut up their food, they would sharpen their knives on the vicar's gatepost leaving deep grooves which can still be seen.

The village lies deep in rural countryside, close to the Welsh border.  In St Michael's Church (SY15 6BN), a marble tablet on the left of the chancel arch records that Thomas Bray was baptised here on 2nd May 1658.

Born at Marton Crest nearby, Bray is remembered for the foundation of two of the Church of England's oldest missionary organisations - the Society for the Propagation of the Gospel and the Society for Promoting Christian Knowledge.  In 1695 he was appointed by the Bishop of London to take charge of church affairs in Maryland, and his work developed from supplying the new colony with Anglican clergy and providing their parishes with libraries. 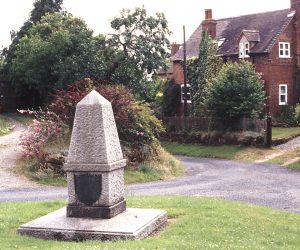 This hamlet was the birthplace of Richard Baxter (1615-1691) and the event is marked by a squat granite memorial on a grassy triangle beside the road (TF6 6QY).  If you wish to see it, make sure you are heading for the right village: there are three Rowtons in Shropshire alone and another one close to Chester.  The one we want is just off the A442 between Telford and Hodnet, close to High Ercall, where the great puritan pastor was baptised. 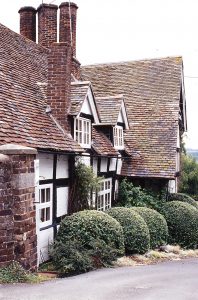 Richard Baxter spent the first ten years of his life with his grandparents at Rowton and then joined his parents at Eaton Constantine, a little village just off the B4380 at the foot of The Wrekin.  The house, conveniently called Baxter's House, still stands in the centre of the village - a fine half-timbered Tudor building with a little bannistered porch (SY5 6RF).  It can be seen from the road but is privately owned and not open to visitors.

While living here, Baxter attended a school at Wroxeter, but the teaching was unsatisfactory and he later regretted his lack of sound education. 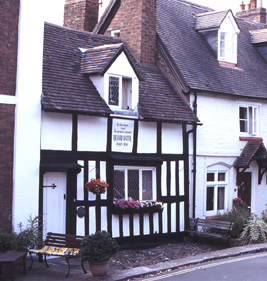 The town is set on a hill high above the River Severn, and set on the highest point is St Leonard's Church (WV16 4EJ) built of the familiar local red sandstone. Richard Baxter came here for his first church appointment as curate to William Madstard.  He made little impression, describing the parishioners as a dead-hearted and unprofitable people.  After eighteen months he left Shropshire to find a riper harvest at Kidderminster in Worcestershire.

The little black and white cottage where he lived is one of a circle of houses of all shapes and sizes that surround the church on its green.  It proudly tells us that the learned and eloquent Baxter was here from 1640 to 1641. 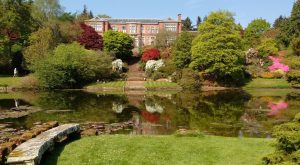 Much of the land round Hodnet is taken up with two large estates - Hodnet Hall and Hawkstone Hall.  In the eighteenth century, the estates were the homes of two distinguished families and each produced a pair of brothers, who left their marks on the religious movements and controversies of the day.

Hodnet Hall (TF9 3NN) was inherited by the father of Reginald Heber (1783-1826), the hymn writer and missionary bishop, who was born at Malpas, just across the border in Cheshire, where his father was vicar, but grew up at Hodnet.  On leaving Oxford, Heber became rector here in 1807 and was active in writing, parish visiting and promoting church schools.  The house is still owned by the Heber-Percy family, but the gardens are open to the public at selected times

In 1823, Heber was appointed Bishop of Calcutta.  He worked tirelessly to establish the church in India, visiting most parts of the subcontinent, but died of cholera only three years later.  He is remembered as the author of many hymns, including the uplifting Holy, Holy, Holy and the now rather dated From Greenland's icy mountains.  Heber's half-brother Richard was MP for Oxford University, a founder of the Athenaeum Club and a fanatical book collector.  At his death he left eight libraries with a total of 147,000 books. 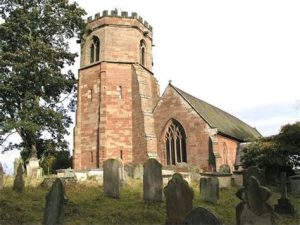 Brothers Rowland Hill (1744-1833) and Richard Hill (later Sir Richard) were both born at Hawkestone Hall (SY4 5UX, now a hotel).  Rowland was ordained deacon in the Church of England but moved towards nonconformity and became famous as an evangelical preacher.  He divided his time between the Surrey Chapel which was built for him in south London, and Wotton-under-Edge in Gloucestershire, spending six months at each location for over fifty years.  In London, he had Sunday Schools with over 3,000 children and was an early supporter of the Religious Tract Society and the London Missionary Society.   Sir Richard Hill was converted following a conversation with the saintly John Fletcher of Madeley at an inn in Shrewsbury.  He entered parliament and became an outspoken Calvinist, strongly critical of John Wesley's Arminianism.

St Luke's Church (TF9 3LD) stands on an outcrop of red sandstone and is built of the same material.  Three of the four men are remembered here.  Reginald Heber has a medallion portrait in the Heber-Percy chapel, with an epitaph by Robert Southey.  He is also commemorated by tiles in the chancel with the letters RH - a source of possible confusion as all men had the same initials.  Richard Heber also has a memorial in the chapel.  Sir Richard Hill is buried here and to the left of the door is a plaque which tells us that The character he most delighted in was that of a sinner saved by sovereign grace.

The town has memories of two famous puritans - father and son - the preacher and scholar Philip Henry (1631-1696) and Bible commentator Matthew Henry (1662-1714).  Henry senior lived and died at Broad Oak near Bronington, just across the Welsh border.

St Alkmund's Church (SY13 1LB) at the top of the High Street is broad, tall and light, built in 1713 after the previous building collapsed.  On the north wall is a marble tablet to Philip Henry, describing him as An elegant scholar, a profound divine and an exquisite expositor of the word of God.  He was vicar of Worthenbury until 1662 when he was ejected - one of the 2,000 victims of Charles II's Act of Uniformity - but continued to preach as a dissenting minister.  Philip Henry's diaries covered twenty-two years and these, together with letters between him and his son, are of interest for the light they shed on the persecutions of the time.

Matthew Henry was born at Broad Oak and attended Sir John Talbot's school in Whitchurch.  We meet him again at Chester, where most of his work was done.