With no historic cities and much of the county swallowed up by the expanding suburbs of London, there are few places in Surrey relevant to this guide.  The scene of John Wesley's last sermon and the birthplace of a famous hymn writer are about all it has to offer. 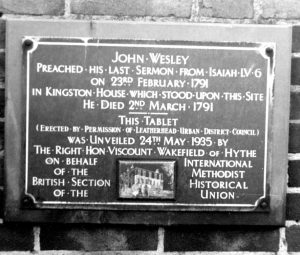 John Wesley preached his last sermon on 23rd February 1791 at Kingston House which stood on the corner of Bull Hill and Leret Way.  The house has gone but the office block which now occupies the site is called Wesley House (KT22 7AH) and carries a memorial plaque.  It was used as council offices from 1935 to 1983.

Wesley died a few days later but not before he had penned a letter to a young politician called William Wilberforce, urging him to continue with the cause he had recently embraced - the abolition of the slave trade.

Augustus Montague Toplady (1740-1778) was born in a cottage in West Street near the centre of the town.  The family had no connections here, but his parents were travelling to Portsmouth when his mother went into labour.  Toplady's father was a major in the army and was on his way to join a ship for South America.  He died of yellow fever at the siege of Cartagena a few months later.

The original cottage has gone and been replaced by a row of shops.  10 West Street is part of a store and carries a memorial tablet best seen from across the road (GU9 7DN).  The stone was taken from Burrington Combe in Somerset, where a cleft in the rock inspired Toplady's most famous hymn Rock of Ages.  There is also a brass inscription to him in the south chapel of St Andrew's church.